Châteauneuf-du-Pape is a village located in the Southern Rhône Valley, in France. The name refers to the chateau, completed in 1333, that was built just outside Avignon as a summertime residence for Pope John XXII, who, like his predecessor, Pope Clement V, spent his summer retreats in the castle, now known as Châteauneuf-du-Pape. The papacy discovered the region’s exceptional terroir and promoted the planting of quality vines on the slopes near the village of the château.

Today, Châteauneuf-du-Pape AOC makes up approximately 3 200 ha of vineyards.  The AOC allows a blend of up to 13 different grape varieties in its red wine as long as the blend remains predominantly Grenache. 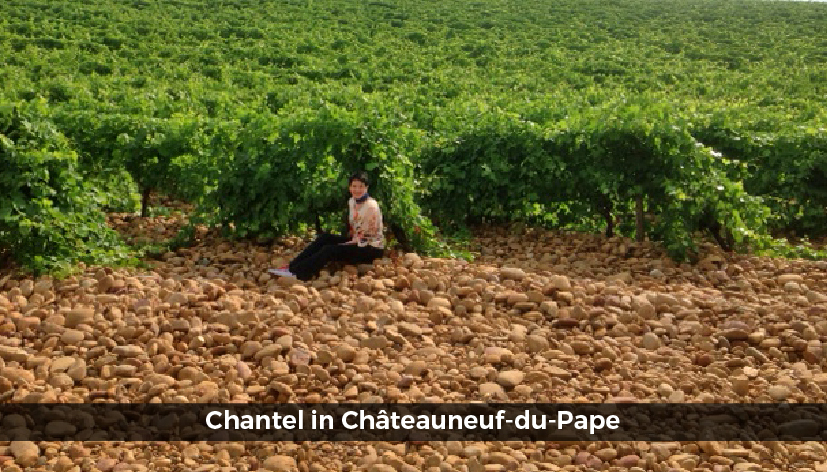 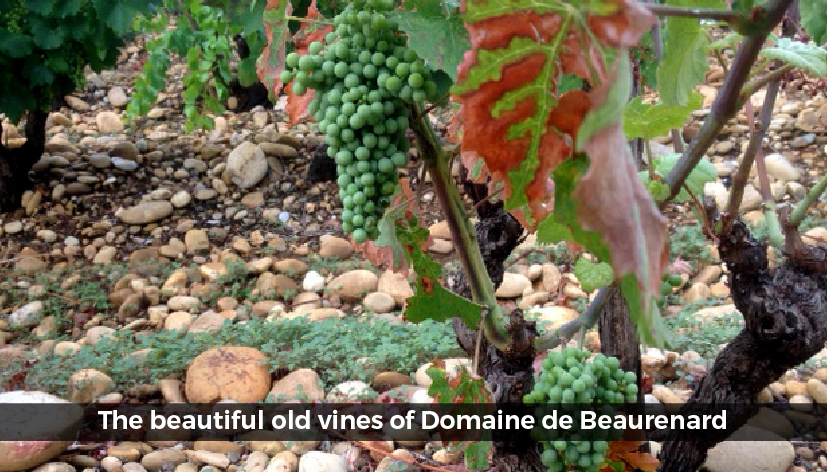 The Coulon family has farmed the area named “Bois Renard” since 1695; seven generations of dedication, meticulous care, and excellence. The winery is now run by brothers Frédéric and Daniel Coulon.  We were extremely honoured to welcome Antonin Coulon, the son of Daniel Coulon, and the eighth generation, from the legendary Domaine de Beaurenard to Restaurant Mosaic for a weekend long celebration of their Châteauneuf-du-Pape wines.  Due to popular demand and limited seats available during our tastings, we started the celebrations with an informal event during dinner on Friday evening where we tasted seven great wines from the Domaine de Beaurenard range while enjoying Chantel’s new Tabula Rasa Menu.

We began with the Domaine de Beaurenard Châteauneuf-du-Pape Blanc 2013 and Antonin explained more about the making of the wine while guests enjoyed their amuse bouches.  A wine filled with finesse, elegant, floral and fruity flavours; it epitomized the diversity of the allowed white cultivars used for the production of this blend: Clairette / Bourboulenc / Roussanne / Picpoul and Picardan. 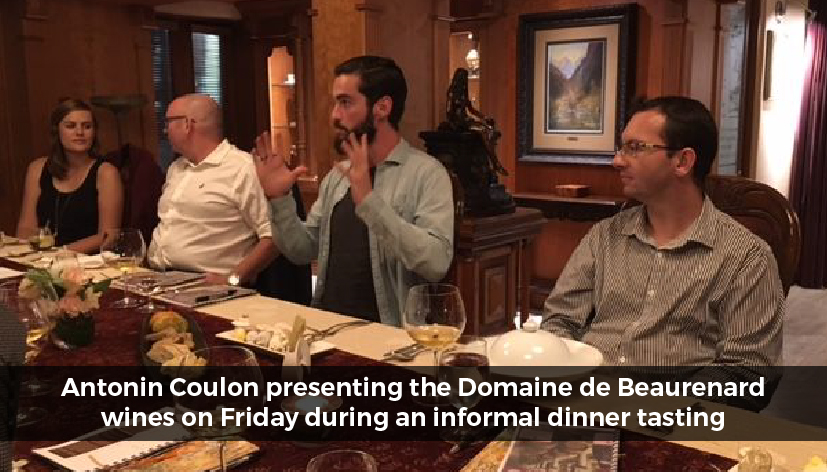 Antonin then introduced the Domaine de Beaurenard Boisrenard Blanc 2012 with our first starter – Tidal Pool. A medium-bodied, juicy wine with notes of pineapple, apple tart, chamomile and honey blossom, made from vines of 6 different grape varieties ranging in age from 60 to 100 years old that are co-planted on complex soils, creating the backbone of this magnificent white wine.

Soon it was time to move on to tasting a range of red wines from the 2005 vintage, starting with the Rasteau Les Argiles Bleues Rouge 2005 – a wine that Antonin explained is a reflection of the vintage rather than the terroir. Concentrated with naturally dense tannins, the wine was not lacking in finesse and elegance.  Next we had the Châteauneuf-du-Pape Rouge 2005, which are made from vines that are 45 years old on average - it has excellent concentration and lush tannins for the vintage with a round, opulent mouth feel - we all agreed that it was a wine that will age well for another decade, or more. The last of the 2005 vintage was the Boisrenard Rouge, from parcels of old vines 60-100 years of age, it exhibited fresh cherry and boysenberry flavours, sweetened by vanilla oak and candied liquorice notes. These were simply gorgeous wines, beautifully showing the elegance and the ageing potential of the range of Châteauneuf-du-Pape wines. 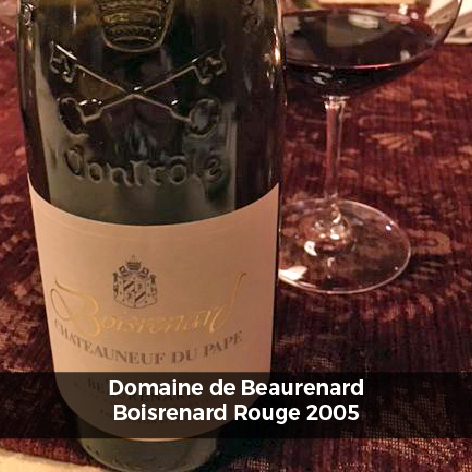 As a final treat Antonin presented the last red wine of the evening, the Rasteau Rouge 2012 – a complex and full-bodied single vineyard wine, focusing on the spices and scents of scrub, specific to this area.  The guests all agreed that the wine indeed showed beautifully with the 36-month-old Comté cheese course – a treat not to be missed! We concluded the evening with the only sweet wine made by die Domaine (and only rarely!), the Naturel Grenat 2011 – a 100% Grenache, heady with an opulent sweetness, aromas of black fruits, figs and balsamic with great balance between the fruit flavours and spicy notes.

On Saturday morning Antonin hosted a formal tasting event for our wine connoisseurs with a tutored tasting of 3 different flights; tasting a total of seven wines followed with a further seven wines during lunch. His remarkable energy and passion for winemaking resonated with the guests and set the pace for an enjoyable morning with some incredible wines. 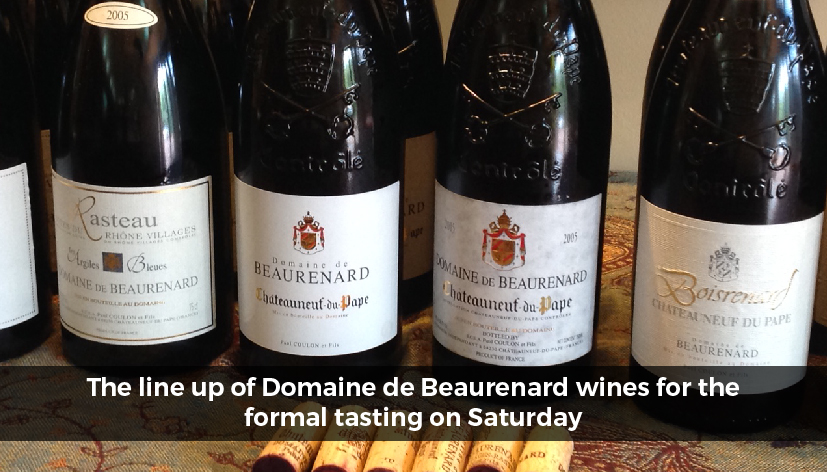 First up he compared the 2012 and 2005 vintages of the Rasteau Les Argiles Bleues Rouge, showing the evolution of the wines with the freshness of the fruit flavours still very present in the older vintage and we were astounded at the sheer complexity of both these wines.

Next was a comparison of the same vintages of the Châteauneuf-du-Pape Rouge. While the 2012 delivered the classic Coulon style of vivid loganberry, blackberry and raspberry fruit, the 2005 offered more complex notes of white chocolate, black cherry, roasted herbs, pepper and espresso.

The last flight compared the Boisrenard Rouge 2012 and 2005 vintages, from this co-planted plot of which the actual varietal proportions is guessed at around 70-80% Grenache, the remainder of mixed cultivars. The 2012 was deep and rich, yet still relatively approachable given its overall polish and elegance, while the 2005 offered a striking array of red and dark berries, flowers and garrigue. 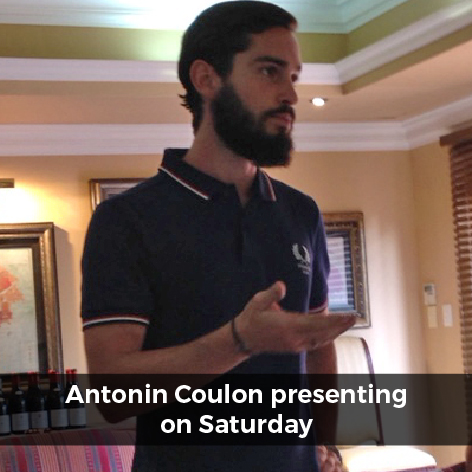 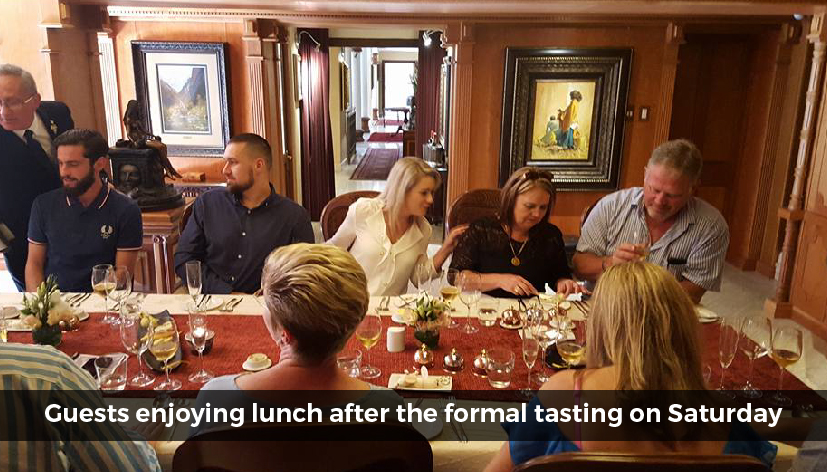 The Saturday morning tasting was followed by a lunch specially prepared by Chantel to pair with a further selection of the Domaine de Beaurenard range. We were truly humbled by Antonin’s enthusiasm and respect for the history of Châteauneuf-du-Pape and his family’s heritage, as well as his vision for the future.

The Mosaic staff extends our thanks and gratitude to Antonin for his time spent with us, as well as the rest of the Coulon family for making this weekend possible.  It was truly an event that will remain one of the highlights of the 2017 calendar at Mosaic!

We can sum it up by an email received from one of the guests after the event:

“It was a great day – the best ‘professional/work day’ I have had in many years! From the tasting led by Antonin, Chantel’s beautiful creations and the company at lunch. I must say, from about halfway through lunch, the whole table were all chatting like old friends and it was good to chat to Antonin further (thank you for the table placing).”