CELEBRATING WOMEN'S DAY WITH CHAMPAGNE ... and the leading ladies of fashion, film and stage

The Mosaic Team hosted a unique tasting event with a lunch and dinner on Wednesday, 9 August 2017 to celebrate Women's Day with some of the most revered and famous champagnes in the world!

"Queen of the Bubbles", Junel Vermeulen was invited to host the two tasting events in honour of this special day. 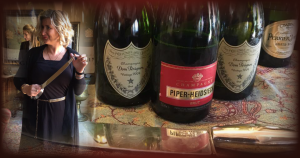 Junel enchanted our guests with her bubbly personality as she explained the history and origin of the famed beverage that has been known for centuries as the world's "celebratory drink of choice" – champagne!

More than that, however, in celebration of Women's Day, introduced our guests to the champagnes enjoyed specifically by the legendary leading ladies of the silver screen, stage and fashion at the turn of the previous century.

Guests were treated to champagnes such as Piper-Heidsieck Cuvée Brut Nv. With its delicate and fine bubbles, it is dominated by aromas of fresh fruit, with pear and russet apple and a few hints of citrus fruits such as star fruit. The finish evoked flavours of fresh grapes, livened with hints of freshness and aniseed. Favoured by the legendary Sarah Bernhardt, a French stage and early film actress, born in the 1840’s in Paris, France. She was referred to as “the most famous actress the world has ever known”. Escoffier, a famous chef, once asked her about her legendary energy. She said: “The main thing is willpower, sustained by an excellent champagne...” 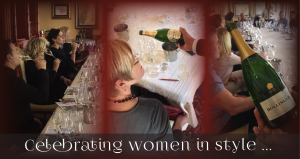 This was followed by the Veuve Clicquot Ponsardin Brut Nv. It had a brilliant aspect and an effervescence that was lively and long lasting. The Chardonnay component gives this wine a refined mineral flavour with a fat, rounded mousse, with some nice mid-palate grip. This incredible champagne, named for the iconic Madame Clicquot, inspired the now famous quote by legendary fashion designer, Coco Chanel: “I only drink Champagne on two occasions, when I am in love and when I am not.”

Next up was the "Art Nouveau-inspired" Perrier-Jouët Grand Brut Nv. The striking freshness and vivacity of the floral and fruity fragrances of this champagne take root, before giving way to subtle notes of vanilla and butter, lending the wine a fruity and consistent character. In 1970 Grace Kelly, princess of Monaco, made Perrier-Jouët her favourite Champagne and allowed the company the privilege of sponsoring the annual famous ‘Rose Ball’.

Following these world class names, where Junel offered our female guests the opportunity to open the bottles by sabrage, the "champagne for the Moment!"  - the Montaudon Réserve Brut Premiere Nv did not disappoint. With a wealth of sparkling bubbles, it was rich and toasty, with notes of almonds and brioche toast, combined with crisp green apple and lime accents. 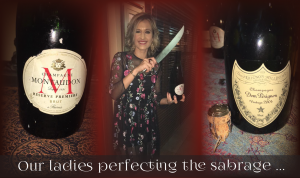 Josephine Baker, the phenomenal actress, singer, dancer and civil rights activist, once described by Ernest Hemingway as “the most sensational woman anybody ever saw, or ever will," was a lover of Montaudon and in 1936 she signed an exclusive contract with the Champagne House to be the ‘First Class Champagne’ for her Parisian cabarets.

Finally, we ended the celebrations with one of the most celebrated champagnes in the world! The Dom Pérignon Brut Millésime 2004 was absolutely mind-blowing in its intensity and elegance. From its discreet bubbles to the classic flavours of white fruit with hints of dried flowers, it is no wonder that it became a fixture of the image of the legendary sex symbol, Marilyn Monroe! The bubbly drink became a metaphor for her sparkling personality - therefore this sparkly champagne was the perfect end to a fabulous day!