“Tokara is the embodiment of GT Ferreira’s philosophy that good wine, good food and good art go together to make a good lifestyle.”

The Restaurant Mosaic cellar team was invited to celebrate the 20th vintage of Tokara with general manager, Karl Lambour and winemaker, Stuart Botha as we drank and philosophized our way through a line-up of their new vintages and latest releases, followed by a mouth-watering lunch, at The Saxon this past Tuesday, 11 June 2019. 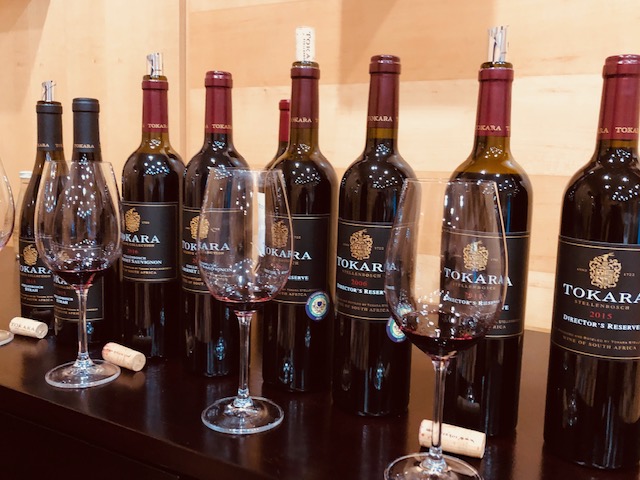 We were joined by other like-minded wine aficionados such as Michael Fridjhon, Miguel Chan and Carrie Adams, which of course created a lively energy around the table. Karl introduced the current winemaker, Stuart Botha, to the group – he joined Tokara in 2017 and worked alongside previous winemaker Miles Mossop, in what Karl calls “one of the longest handovers in South African wine history” – an amazing 9 months, releasing his first solo vintage in 2018.

Taking us back in time, Karl told of how GT Ferreira first bought the wine farm in 1994, with the first vintage, the 2000, being released in 2003 under the name “Zondernaam”. The first vintage released under the Tokara name was in 2005 and Karl jokingly laughed that, after two decades, they are finally done with the old name! 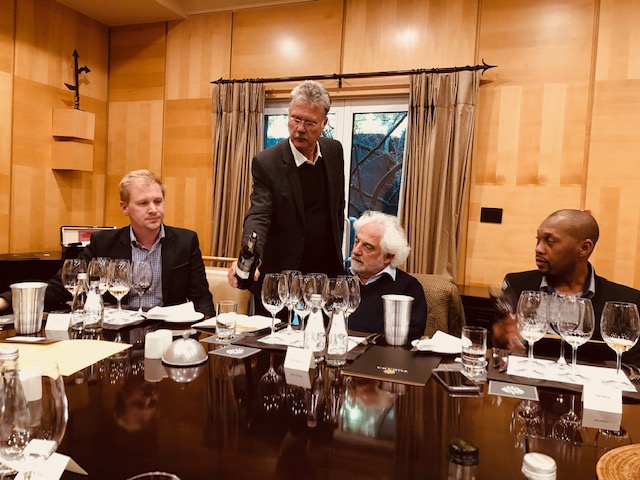 Quietly confident and soft-spoken, Stuart wasted no time explaining his vision for Tokara, with the focus moving to wines made from grapes grown on the estate – even though they still make wines from grapes grown in Elgin, this is not the main focus.  He is passionate about the Cabernet Sauvignon grown on the farm, making up almost 60% of the vineyards, saying that he believes this is their “prestige” cultivar and what Tokara will be synonymous with in the future. 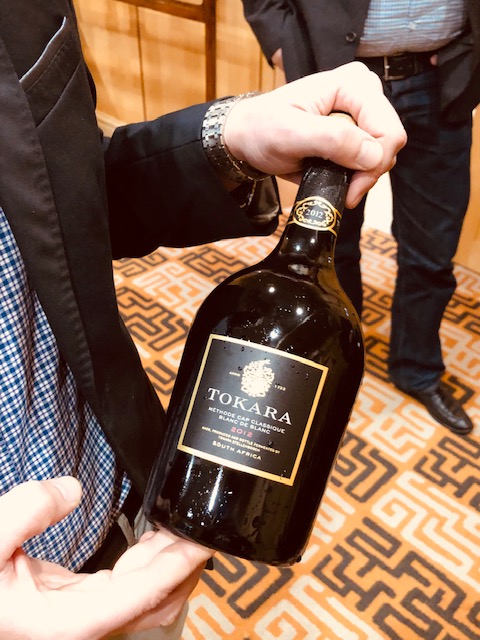 He started off the tasting with another new release from the estate, a 100% Blanc de Blanc made from Elgin Chardonnay. The 2011 was their very first release and is increasingly popular amongst wine lovers. We were poured the 2012, which spent an amazing 7 years on the lees (15 months on the gross less in barrels with the rest in bottle), creating a wine that is golden with a fine, elegant mousse. Beautiful citrus fruits with a crisp acidity and toasted brioche flavours, this is opulent and full-bodied with an almost sweet/sour element on the mid-palate that is not unpleasant – complex and layered, we recommend that this can be kept for a few more years in the bottle.  The bottle has an interesting shape, based almost of the same shape as the Laurent Perrier Grand Siècle (but not quite) and is currently the only South African MCC to be sold in this particular bottle.

The second wine was the Directors Reserve White 2017, made from 69% Sauvignon Blanc and 31% Sémillon, from the estate. The Sauvignon Blanc vineyard is located on a cool pocket on the side of the mountain, facing south south-east and the components were fermented separately in 400l French oak barrels.  Notes of fresh green beans with some stone fruit aromas initially, the wine opens up with notes of pink grapefruit and baked brioche. This was considered by Michael Fridjhon to be “the most Bordeaux-like white blend ever made at Tokara”. 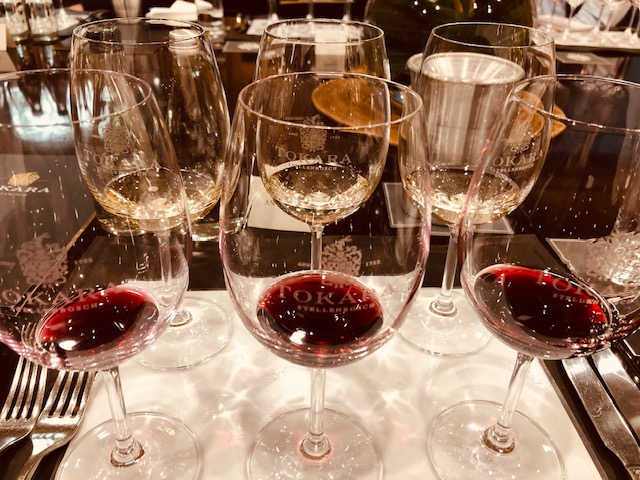 Next up was the Reserve Collection Chardonnay 2018, from grapes grown on the estate. Vibrant light gold in colour, this had notes of grilled pineapple and well-integrated wood. After some time, aromas of aniseed and vanilla floats up from the glass. Well-balanced wine with a creamy mid-palate and flavours of citrus, star anise and toasted almonds leading to a lovely finish. This is still a young baby and we would recommend to keep it for another 3 years before trying again.

The first red wine poured was the Reserve Collection Syrah 2015, made from a single block of 1.7ha situated on a steep, terraced slope of the Simonsberg mountain. Spiced licorice with aromas of blueberries combined and secondary notes of vanilla and cedar makes for a classy, elegant wine that is refined and rich with a silky-smooth mid-palate. A gorgeous Syrah made as natural as possible with little interference from the winemaker.

The Reserve Collection Cabernet Sauvignon 2016 is a powerhouse… Dark maroon in colour, it has notes of dark berries, cedar oak and fresh herbs. The palate is rich and brooding, though not at all opulent, just… right.  Stuart calls 2016 “the vintage of restraint”, saying that he believes that this is the vintage to watch.    The Directors Reserve Red 2015, with a portion of 71% Cabernet Sauvignon from the same vineyard, is a classical Bordeaux-style blend with dark berries, a hint of dried herbs and graphite.  On the palate there are flavours of dark cherries and ripe plum skin with a hint of spice that has grippy tannins on the lingering finish.  Although complex, it was called around the table to be a wine of “instant gratification”. 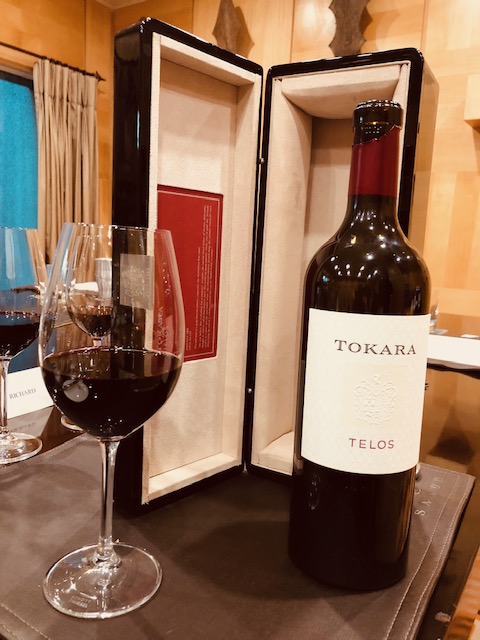 During the mouth-watering 3-course lunch, Stuart and Karl poured two of the older vintages, the Chardonnay 2007 and the Directors Reserve Red 2006.  Dark yellow in colour, with citrus fruit and toasted brioche and vanilla flavours leading to a spicy finish, the Chardonnay was simply gorgeous and paired beautifully with the asparagus and pea starter.  The Reserve Red 2006 had a lovely dark colour and was much more herbaceous on the nose with hints of dark black berries on the palate.  It was not an unhappy pairing with the lamb and aubergine main course and a lovely precursor to the “grand finale” – the brand-new release called “Telos”, the Greek word meaning “in conclusion” or “the end”.

Always meant to be a luxury item, there was only 1186 bottles made, of which only 1000 will be released to the trade. Mainly Cabernet Sauvignon (92%) from the original block on the estate, it is fresh and lively – truly expressive of the site.  Called “seamless” by Michael Fridjhon and “intensely honest” by the winemaker, this is a beautifully integrated wine that will excite and entice in its “complex simplicity…” 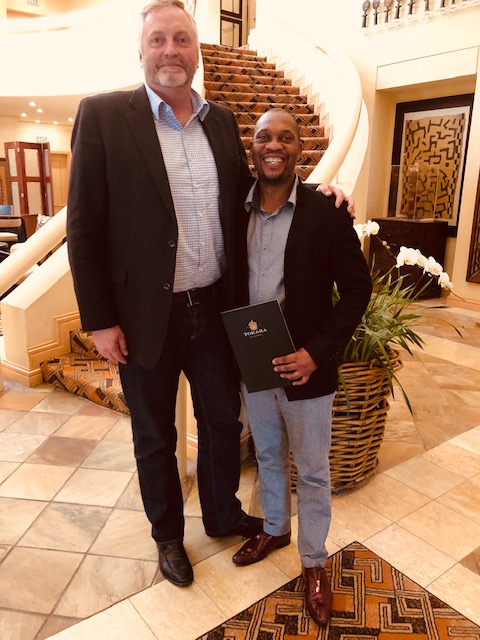 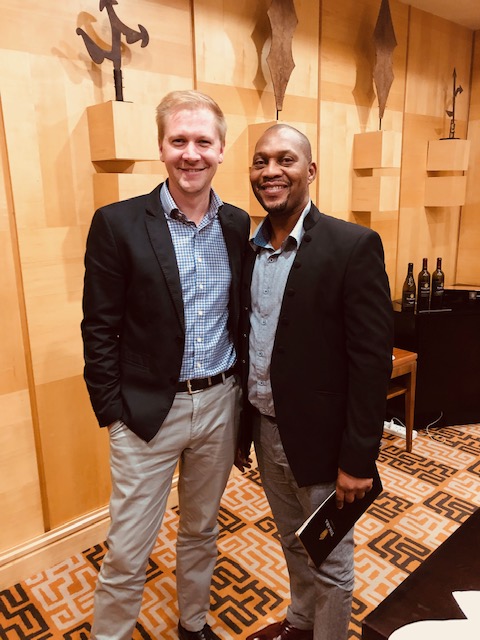 Thank you to the Tokara team for hosting us and congratulations to an amazing team on two decades of excellence! We look forward to see what more Stuart has in store for the world in the next 20 vintages!