Restaurant Mosaic was excited to host a singular tasting event, where we posed the question… "Are our local wines really as good as the international icons?" on Wednesday, 16 October 2019.

There was great excitement during the lead up to the tasting event as guests were welcomed in the Legacy Art Museum entrance hall with a glass of Silverthorn Jewel Box 2015, a Chardonnay / Pinot Noir blend from the Robertson Valley. 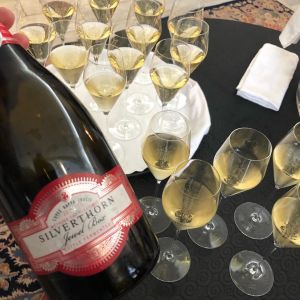 Our suave Sommelier Moses and Cellar Master Annerie welcomed the guests to this "much anticipated" tasting with a few words about the history and future of the wine industry in South Africa and how, in recent years, we have become known for excellent quality wines, which has been lauded widely by international wine critics, such as Neal Martin and Tim Atkin. 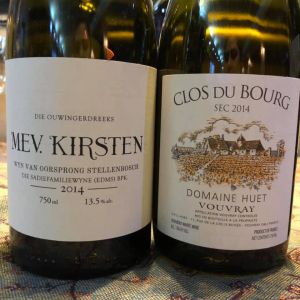 This set the scene for the introduction of the first flight - a blind tasting of Chenin Blanc. One of the two wines poured is one of the most highly awarded and acclaimed Chenin Blanc wines in South Africa. The “Old Vine Series” Mev. Kirsten 2014 (named after Mrs. Kirsten, the vineyard’s owner) comes from what is thought to be South Africa’s oldest Chenin Blanc vineyard, planted in 1905. Eben Sadie is widely known for his absolute regard for place above progress...  producing wines that are ethical and authentic...  And this unique wine did not disappoint! The second of the two wines poured has a history dating back to the 14th century from the Vouvray region in France, which has been known for their Chenin Blanc since as early as the 9th century!  The Domaine Huet Clos du Bourg Sec 2014 is from an iconic monopole, generally regarded as the greatest of the three Huet single vineyards, and one of the most revered in the appellation. There was much speculation around the table as guests were asked which of the two wines they preferred and then asked to guess which of the wines was the Swartland Chenin Blanc and which was the Vouvray Chenin Blanc... in an interesting vote the majority of the guests preferred the Swartland Chenin Blanc although the majority correctly identified the Vouvray Chenin Blanc!  A huge congratulations to Eben Sadie! This wine is simply superb and definitely worthy of being in a lineup with one of the most iconic Vouvrays in the world! 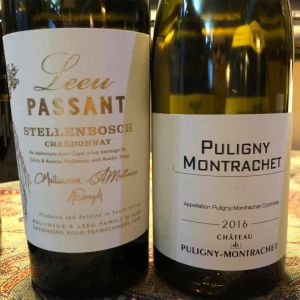 For the second flight, the team compared two Chardonnays - one from the highly acclaimed Chris and Andrea Mullineux, who established Mullineux Wines, based in the Swartland in 2007. This wine, however, is from a new venture which was borne when after many years and on the advice of viticulturist, Rosa Kruger. They formed a partnership with Analjit Singh in 2013, and renamed the company to Mullineux & Leeu Family Wines, opening the way for a new project – Leeu Passant, a wine that celebrates the rich history of South African wine. Sourced from a parcel of Chardonnay in the Helderberg Mountain, the Leeu Passant Chardonnay 2016 was named the John Platter Wine of the Year in 2019!

The other wine poured - the Château de Puligny-Montrachet Puligny-Montrachet Blanc 2016, is made by the renowned winemaker, Étienne de Montille (of Domaine de Montille) and is simply put...  "a classic expression of Burgundy".  Here there was lots of discussion around the table as to which wine was preferred and the voting was declared a tie as guests could not agree unanimously...   Many commented on the incredible moreish flavour of what they thought to be the Leeu Passant while others commented on the elegance of what they thought to be the Burgundy wine... and while the guests were 100% correct on which wine was made locally and which internationally, as a matter of taste the room was divided!  This is a huge compliment to Chris and Andrea and we applaud them for their enormously successful effort! 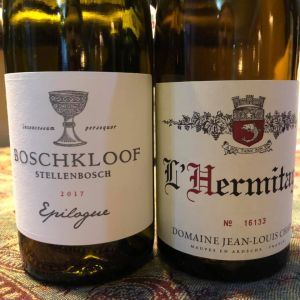 For our next flight, we moved on to Syrah with two of the most highly awarded wines in the world!  Proudly South African, Boschkloof Wines was purchased in 1995 by veteran winemaker, Jacques Borman to pursue his dream of starting his own family winery and was named after the natural ravine or ‘kloof’ on the farm.  His son, Reenen Borman, now makes the wines and together their aim is to make site-specific wines and to showcase the beautiful soils their vineyards grow in. Their Epilogue Syrah 2017 is the most highly rated Syrah by Tim Atkin in South Africa!  With such a curriculum which best wine to taste alongside than the "birth of Syrah" - from Domaine Jean-Louis Chave, winegrowers in the Northen Rhône since 1481, representing 16 generations of unbroken lineage committed to the production of some of the finest Syrah on the planet!  The Hermitage 2015 is a product of these cellar with their unmatched meticulousness continuing through 5 centuries to render venerable expressions of the purest of Northern Rhône terroir.

Here there was some division with guests clearly choosing their favourites - dividing the room in half, however when it came to choosing which was South African and which was International, guests were pleasantly surprised to hear that what they thought to be the historic Hermitage was, in fact, our locally produced Epilogue!  This is an incredible feat, Jacques and Reenen can rightly be proud of this magnificent wine! 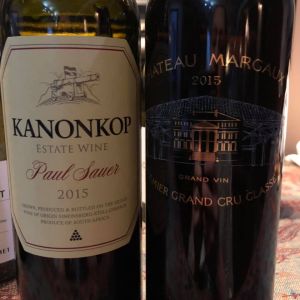 For the next flight we took the challenge to the next level as we pitted the much acclaimed and internationally awarded 100 point Kanonkop Paul Sauer 2015 alongside the same vintage from what is most likely the most well-known of all the châteauxs of Bordeaux - the famed Château Margaux!  The 2015 Margaux is presented in a limited-edition bottle to commemorate Paul Pontallier, who died after more than two decades as estate MD and who is credited with making significant improvements to the wine while the Paul Sauer is winemaker Abrie Beeslaar's 14th vintage at the iconic Kanonkop Wine Estate. With a price difference of more than R40 000.00 between the two wines, guests thought it would be an easy guess - were they ever so wrong!  After lengthy discussions and several guests changing their minds a few times, Moses finally took pity on everyone and revealed which wine was poured first and which second... guests were simply astounded that the quality of both wines, saying that this was the ultimate proof... our South African wines are definitely worthy of the company of these international greats!  Congratulations to Abrie on producing a wine that quite simply makes us proud to be South African! 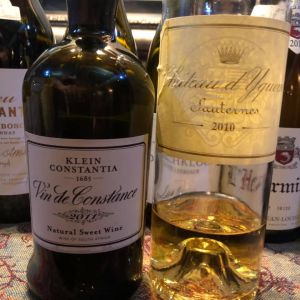 The last flight poured it was impossible to hide the identity of the wines... The Klein Constantia Vin de Constance and Château d'Yquem are both iconic sweet wines with impressive histories and are highly acclaimed and awarded by international wine critics.

“Kings vied for possession of this wine; Louis Philippe sent emissaries from France to fetch it; Napoleon drank it on the island of St Helena to find solace in his lonely exile; Frederick the Great and Bismarck ordered it; and the English Prime Minister – who had sampled it with much delight at Downing Street – made sure that regular consignments from the Cape were delivered to Buckingham Palace for the King.” This is the ethos and history of the Vin de Constance... The 2011 Vin de Constance was winemaker Matthew Day’s first solo vintage at Klein Constantia.

The history of Château d'Yquem reads like a novel... an epic saga of events and colourful personalities spanning more than four centuries. "Great wines are not born just anywhere, by accident. A unique set of climatic and geological conditions combine to form a rare equilibrium." This is undoubtedly the case at Yquem...

Made in entirely different styles and from different grapes, this flight was more for enjoyment to end a spectacular evening in grande style!  Many of the guests loved the "golden honeyed notes" in the Vin de Constance while others simply sipped in awe of the "nectar of Yquem"... whichever they preferred, they all agreed that these are both world-class wines! 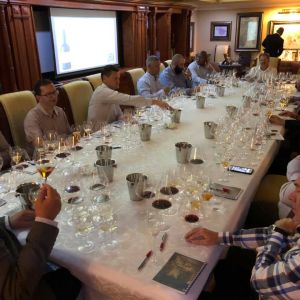 It was a night of remarkable discovery with some of the best wines in the world - locally and internationally!  What can we say...? Except for our South African winemakers to keep doing what their doing...

Thank you to all our guests for their enthusiasm and excitement in helping us answer the question: "So, are we really as good...?"

And the answer is unequivocally...